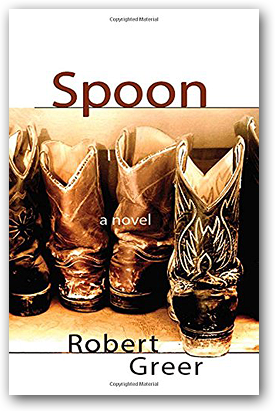 A novel of the contemporary American West, Spoon tells the story of Arcus Witherspoon, a mysterious half-black, half-Indian, oddly clairvoyant man searching the West for his roots. Hitchhiking near Hardin, Montana, Spoon falls in with a ranching family struggling to keep their ranch afl oat amidst the pressures of hard economic times and an encroaching coal company. Proving himself a gifted ranch hand and mentor, Spoon charges himself with rescuing the Darleys and guiding the family's teenage son TJ on his path to manhood. While Spoon's checkered past includes a prison stint and a navy tour of Vietnam, it is his tenacity, wisdom, and charm that end up defining this quintessential Western man.

"Vividly presents the realities of life on a cattle ranch. Larry Watson's Montana 1948 comes to mind as a readalike."
—Library Journal

"An enormously engaging novel with characters who feel like old friends and a spirit as big as the West. From the opening paragraphs, you are in the hands of a master with the ability to evoke the grandeur of the still untamed western landscape and the folks whose lives are shaped by it. What a gifted storyteller Robert Greer is! Spoon is the kind of story you will remember."
—Margaret Coel, author of the Wind River series

"From start to finish, the reader is completely swept up in the Darleys' and Spoon's stories. An excellent book that perfectly illustrates Greer's talent as a storyteller and writer."
—Bookbitch.com 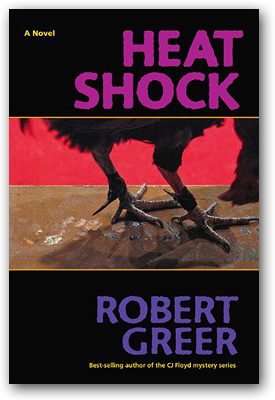 
"Reading Greer is like being hooked up to an I.V. that steadily drips suspense."
—Booklist

Half black and half Vietnamese, emergency room physician Dr. Carmen Nguyen rides her motorcycle and practices medicine with equal passion. But her years on the ward have taught her one rule about becoming personally involved with patients: don't. Yet against her better judgment, she accedes to the dying request of Luke Redstone—an aging ex-miner who developed a rare cancer while living in the yellow-cake hills of Colorado.

Someone has been sneaking around Redstone's cabin with an eye to stealing his flock of fighting cocks. When the old man asks Carmen to watch over his coop, the former medical researcher becomes curious about these unnaturally strong and aggressive birds. She soon learns that their true value has little to do with their prowess in the pit, and she suspects that the secret may lie in the uranium-rich soil near a shut-down, once-thriving mine.

Carmen finds an ally—and perhaps something more—in Walter Rios, a gutsy, guilt-haunted river rafter who brings to her quest skills honed during his tour with military intelligence. Together they must confront a lawless businessman and his private army of stone-cold killers, in hard and bloody pursuit of a genetic bombshell with the shocking power to transform a species.

Painting heroes and villians with equal vividness against the majestic and treacherous backdrop of the Rocky Mountains, master novelist Robert Greer has crafted a tale of suspense from a brave new world rushing at us faster than we know.

"Greer excels both at plot and characterization. His trio of amateur sleuths here fairly leap off the page in their well-limned humanity....Reading Greer is like being hooked up to an I.V. that steadily drips suspense."
—Booklist

For centuries it has been the holy grail of medical science, in pursuit of which the human race has violated nature, launched explorations, and waged war. Now one rogue doctor has dared to unlock the power of one of the most potent substances ever swirled inside a test tube—and stands on the verge of cracking the code of nothing less than the legendary fountain of youth.

A world-class collegiate swimmer breaks a record at the women's U.S. Olympic trials, then seconds later succumbs to a sudden, violent seizure. A brilliant, maverick molecular biologist stumbles onto a drug that can both enhance athletic performance and accelerate the average life span past every imaginable barrier, until death cuts his experience brutally short. There is a hidden but devastatingly real link between the two tragedies. Few see the connection, until the expanding and shocking web of fatalities draws in research pathologist Dr. Henry Bales.

Bales, dedicated to answering questions inside the safe confines of a lab, now tackles a mystery in the dangerous, unscientific world of unchecked greed and power. To assist him he enlists several allies, including a rival scientist of exotic good looks and penetrating mind, and a certain local bounty hunter who brings a welcome battery of battle-tested street smarts to the rarefied realm of high thinkers and earthshakers. Together they must penetrate a conspiracy that stretches from the high, open training fields of Denver to the cramped, darkened gyms of Cuba. Hurtling toward a deadly climax in a desperate race against time, Bales, a supreme man of reason, knows that none of them may make it to the finish line.

"Greer ties up the threads of his subplots adroitly, and he is especially good at depicting the everyday life of a research lab and the ever-present tension there between applied and pure science."
—Publishers Weekly

"Many of the book's characters are quirky, and its storyline is rich in detail and full of tension. A riveting medical mystery."
—Library Journal